Before any CGI or Pixar movies of adventure, there was a Disney comedy that was a pure escapist fantasy for kids

Honey, I Shrunk The Kids was a 1989 comedy-science fiction film made by Disney.  It tells the story of an inventor who accidentally shrinks down his and the neighbor’s kids and throws them out with the trash. It would end up being a surprise hit for Disney.

I don’t know what it is about Honey, I Shrunk The Kids but to me, it stands out as a movie that was really able to capture our imagination. This is pre-CGI and it was kind of like a dream movie with the concept of being able to shrink down to the size of an insect.

I remember this movie as being an event where we went with multiple families together. The commercials and trailers for it sold it perfectly and as a kid, I remember it living up to the hype and then some.

There were the giant bees, ants and scorpions and a sense of a kids version of Indiana Jones. The movie uses innovative visuals for its time and it was praised by both critics and fans. It stars the brilliant Rick Moranis and became one of Disney’s most successful live-action movies ever.

So read on or listen podcast style if you want!

The Plot Of Honey, I Shrunk The Kids

Wayne Szalinksi is an inventor who is working on a ray gun that can shrink objects. He tests it on apples but he keeps blowing them up. Wayne is really caught up in his work and it’s leading to him neglecting his family.

Their neighbors are the Thompsons. Father BIg Russ is a formal football start and getting ready for a weekend of fishing with his sons. His oldest son Russ has just been cut from the football team and that’s greatly upset Big Russ. There’s also the youngest son named Ron who is the perpetual trouble maker.

Wayne leaves the house for a business conference where he can hopefully present his new, but unproven, invention. He leaves the kids to clean the house and while they do Ron accidentally hits a baseball from next door into the lab. The ball hits the shrink ray and somehow turns it on. Russ makes Ron go over to the house to apologize and somehow all the kids end up getting hit by the shrink ray.

The presentation hasn’t gone so well for Wayne and he comes home and smashes the crap out of the ray gun. After his outburst, he ends up sweeping up all the damage and inadvertently sweeps the kids up and tosses them in the trash.

The kids escape from the garbage bag and have to navigate through their backyard which involves them encountering a swarm of bees, a typhoon from a sprinkler, and the usual interpersonal conflicts.

Wayne finally realizes what the hell has happened and they start searching the yard for the kids. In the meantime the kids have befriended an ant named “Anty” who they ride across the yard. Anty then gives his life for the kids when he tries to fight off a scorpion. This is Bambi’s mom getting shot levels of drama.

Wayne works on repairing the shrink ray, the kids hitch a ride on the family dog and Wayne nearly eats his son who ends up floating in a bowl of cereal. Wayne gets the shrink ray working again and restores the kids back to normal size. They then eat a gigantic turkey.

Cast Of Honey, I Shrunk The Kids

The original name of this movie was actually going to be “Teeny Weenies” and thank crap they didn’t go with that one. Joe Johnston stepped in to direct Honey, I Shrunk The Kids and has also made some epic movies including the original Jumanji, The Rocketeer, Jurassic Park III and Captain America: The First Avenger.

The original writers had focused on this “Teeny Weenies” name to make it seem fun but they realized it might seem intended for toddlers. Disney hadn’t done a ton of live-action movies and they could sometimes be confused with not being intended for children. To show it was more of an older kids movie they then changed the name to Grounded.

They then rejected THAT name and went with The Backyard which isn’t too bad honestly. They settled on Honey, I Shrunk The Kids later on in the process as it was a line of dialogue used in the movie and thought to be a good fit.

The story itself was written by a guy named Stuart Gordon who had an interesting history with movies. He directed a nude theatre version of Peter Pan and also some horror movies including one about a scientest who brings the dead back to life and one about a bunch of murderous dolls.

After he became a father, Gordon wanted to make something more kid-friendly and teamed with  Brian Yuzna and Ed Naha who had worked with him on his horror movies. He came up with the idea of a hapless inventor who invents a shrinking ray, accidentally shrinks his kids and throws them out in the garbage. He pitched it to Disney and they were all over it.

Gordon was the main director of the movie but became sick and that’s when Joe Johnston stepped in.

There are a ton of special effects used in the movie and they needed to be heavily used in order to create a miniature world. It’s interesting to think how this movie would look today but the real-life effects that were available in 1989 still gave it a bit of charm,

The used electronically controlled ants and bees and they tried to use as many practical effects as they could that would work in camera. For that scene where Rick Moranis lands in the Thompson’s pool he would jump off a flying board that was a teeter-totter on a swing set. A stuntman would then push the board making him fly through the air and landing on a mat.

Scale models would be used for the bee scene and miniature plastic models of Russ Jr and Nick were made to ride on them.

They also used a lot of “forced perspective” like in the giant cookie scene in order to make it look bigger. Forced perspective is an age-old technique that’s still used in modern films. It was used in the Lord of the Rings movies to make the hobbits appear smaller compared to other actors and also in ELF to make Will Ferrel appear bigger.

For big things like the giant blades of grass or the bristles of the broom that sweeps the kids up the set, designers would use foam to create them. The broom was a bunch of giant foam bristles that were attached to a hanging screen that would sweep across the stage.

Even the opening title took some advanced work. The opening sequence with the two tiny children running from various objects was one of the very first things to combine hand-drawn animation with 3D models.

Disneys Concerns With The Movie

Disney was a little hesitant getting involved with a horror film director. They had concerns he was going to start killing off kids in the movie. This is a company that turned down Back to the Future because Marty would end up kissing his mother in it.

Their main concern is that it would be a family friendly film but part of the structure of the movie had to involve the possibility that the kids might die. They obviously wouldn’t but they had to face these challenges in order to overcome them.

Disney was also concerned with the creatures and them not being too intense. They didn’t want Antie to look too much like a real ant and wanted it to look more like E.T. This was kind of odd because E.T scared the living crap out of a lot of kids.

Anty was able to stay as intended and would take up to 12 people to operate it. They had a miniature for stop-motion sequences but for most of the scenes when Anty interacts with the kids you’re looking at a giant robotic puppet.

The Initial Response To Honey, I Shrunk The Kids

Honey, I Shrunk The Kids was a bit of a surprise hit for Disney. It made $14 million it’s weekend which, at the time, was far and Disney’s biggest opening ever. Converted to today that is about $30 million.

It opened on June 23, 1989, and went against the monumental Batman and still managed to finish #2. The initial reviews had been somewhat mixed so Disney wasn’t sure what to expect. Their research showed that people were aware of the film but nothing to indicate it would be the hit that it was. It might have helped that everyone was going to see Batman and it wasn’t exactly a kid-friendly movie. Seeing a Disney offer would have been a no-brainer for families.

Batman was also selling out left and right so people who were out of luck who still wanted to see a movie would end up going with Honey, I Shrunk The Kids.

Honey, I Shrunk The Kids is a great bit of ‘80s nostalgia. It was a pretty groundbreaking and original movie. It would lead to a few sequels including Honey, I Blew Up The Kid and Honey, We Shrunk Ourselves.

It’s still a bit of a creative and bizarre movie and could actually be considered a family horror movie. It’s got a kind of mad scientist and a lot of near-death including almost being eaten by your father. There were some definite nods in there to past horror movies such as Attack Of The Crab Monsters and The Incredible Shrinking Man.

There’s also the issue that the title is not grammatically correct as it apparently should be Honey, I Shrank The Kids but don’t ruin our fun, nerds.

But either way it still holds up well and there are still talks to do a reboot of which I can definitely get on board with. 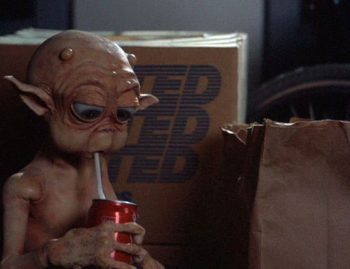